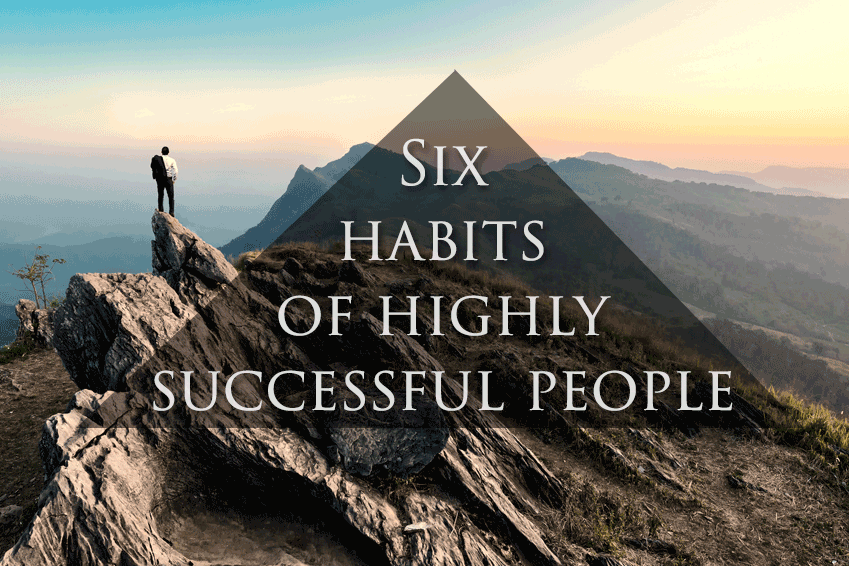 We’ve all had moments where we wish we could be more like the successful people around us, whether it’s the wealthy guy who lives next door, your super-productive sibling, or a celebrity idol.

It’s easy to believe that these success stories are freaks of nature or just plain lucky but that’s generally not the case. The people we look up to tend to have certain habits in common which you can integrate into your daily life to help you succeed.

Getting up early in the morning can be a difficult, but it will significantly impact your productivity. Early rising gives you extra time in the day to contemplate ideas and get things done, and it also ensures that you have time to relax and recharge. Sir Richard Branson, Anna Wintour, and Yahoo’s Marissa Mayer all sing the praises of waking up early for their success.

Surround Yourself with Good People

The well-known saying is true – you are the average of the five people you spend the most time with. Surrounding yourself with people who are motivated and positive will help to shape your demeanour and attitude. Psychologist Adam Grant has shown that success isn’t just about your work; it’s also down to the traits you pick up from people around you.

When you’re super busy, it might feel impossible to take time to exercise but moving your body is central to success, as testified by Elon Musk and Barack Obama. Productive people use physical exercise as a time to plan and take advantage of the extra endorphins to stimulate their brains so make sure to grab twenty minutes on the treadmill or walk home from work when you’re feeling pressured.

You might think of reading as a leisure activity or a lazy person’s retreat, but successful people tend to consume a lot of literature. Reading helps you to discover niche information and pick up on how other people overcome hardships and solve problems – something that reading fans like Bill Gates, Barack Obama, and Oprah Winfrey all describe as central factors in their success.

A large study of over 200 wealthy individuals found that 73% of them spend 5 or more hours a month giving back to their communities. Volunteering exposes you to people from a variety of different backgrounds who might teach you something about yourself and help you to find new points of view. It also makes other people want to help you in return.

You should take breaks and let yourself relax, of course, but you should never lose track of your goals. Success requires hard work, something that thousands of successful people have noted (J.K. Rowling, Steve Jobs, and Thomas Edison amongst them). Success requires that you practice and overcome mistakes or weaknesses, and you can’t do that without putting in the hard graft.

It's Saturday 12:30 AM — We’re currently closed, but please do contact us online, or leave a message. Thank you!